Instead of excitedly watching spring happen in Brighton this late March I was getting involved in Autumn again.  I went on a horticultural adventure to Sydney, Australia to landscape my brother, sister-in-law and nephew’s garden.  As business trips go, this is obviously a winner.  The only previous Bees & Beans working holiday that has ever been on the agenda was a week in Lincolnshire that never panned out.  The reality of working only from architectural plans without having the chance to see the site in person before starting work, and arranging all orders and deliveries on that basis proved slightly nerve-wracking, but worked out fine in the end.

The design process in this case consisted of spending a lot of time with the plans, looking at (not enough) photos and communicating with my brother via Skype and email to make sure I knew what they wanted.  At the same time I was trying to radically improve my knowledge of suitable plants and soil types in their bit of New South Wales.  As they live by the beach and don’t have a downstairs shower, they were keen to put in a outdoor shower near their deck, with a path to access it from the front of the house, and we agreed to make this passageway as lush and tropical feeling as possible with large leaved and colourful planting that could deal with being shaded.  The back of the garden was to be largely turf with a small border for plants and some room for herbs.

This is what the garden looked like when I first arrived: 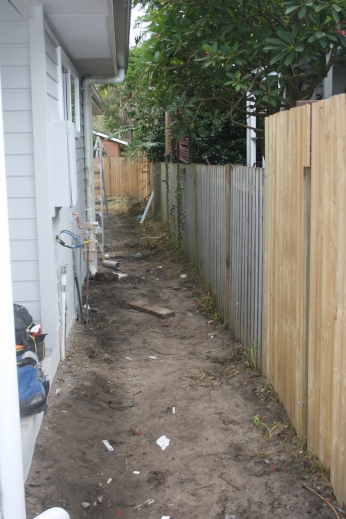 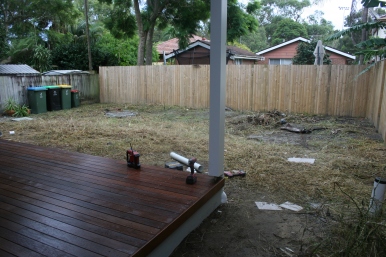 With the help of a resourceful local called Scott (who having just gardened his way through a record-hot, 40 degree summer was much more comfortable than I was in the heat, coming from 12 degree England) and from my brother Leo (who has never really done any gardening before so had a bit of a baptism of fire, especially the day the two of us had 15 cubic metres of soil to move) we made it look like this in 8 days of work:

Outdoor shower and lush planting in this Australian garden 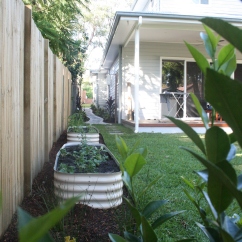 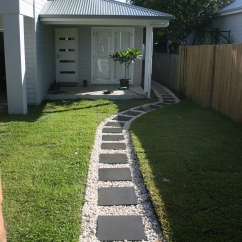 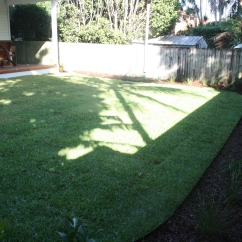 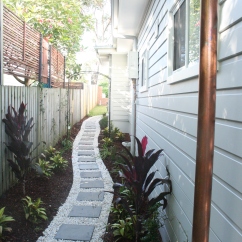 We were very lucky that the storms that had been rocking Sydney for the 2 weeks before I arrived at least kept it out of business hours, as the deadline was pretty tight and I would have been really sad if I’d had to work weekends!

But we got it all done, it looks nice and I even got to jump in the sea sometimes.